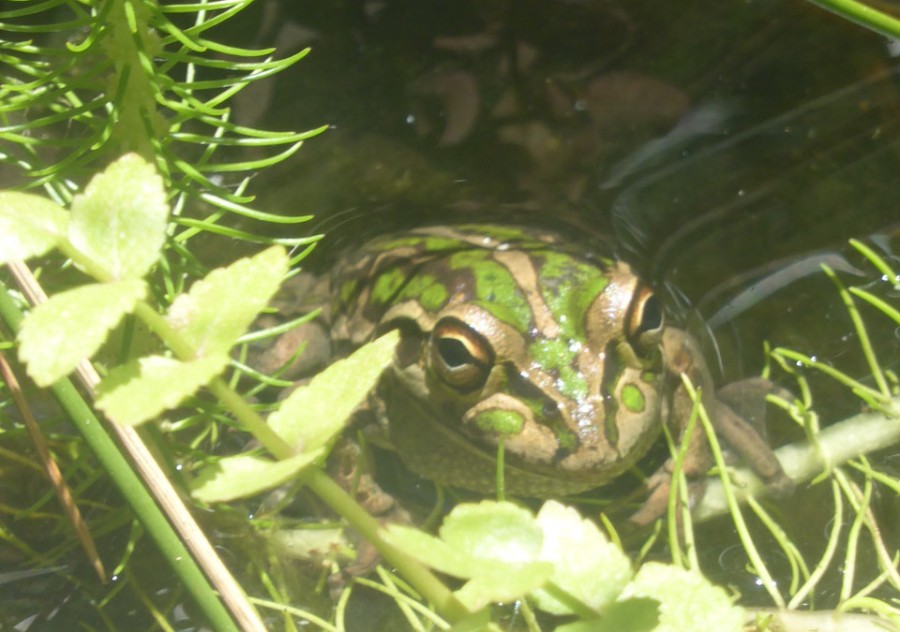 These little frogs (Litoria moorei) grow to about 10cm and live in a very small part of south Western Australia. Last year two found their own way into our little courtyard pond. This year we have four. If this exponential growth continues for another two years, we’ll be in big trouble 😀

Here’s a video I made: their calls, along with a closeup of one half-submerged and sun baking. They really do sound like motorbikes winding up. 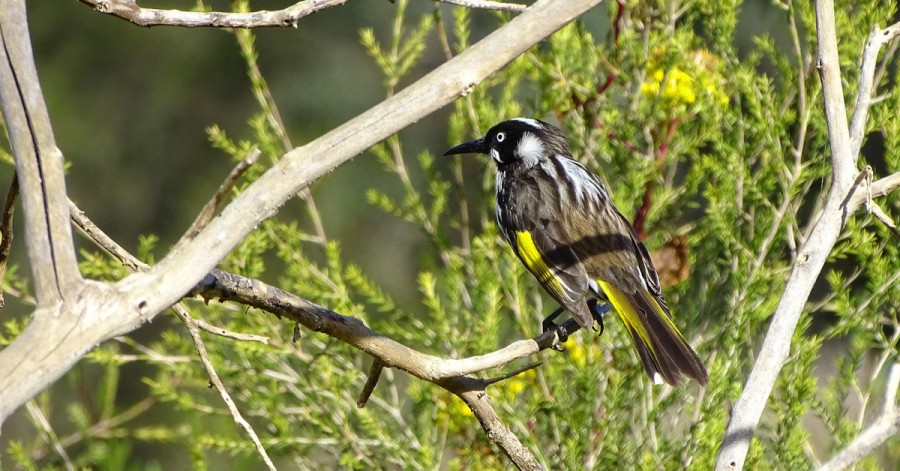 Don’t you just love these New Holland Honeyeaters? They are very common where I live. They especially like all the native plants I’m growing in my front and back yard. No lawn. Just trees, shrubs and ground cover. Two years ago it was bare sand. Now there are all kinds of creatures: birds, native bees with blue/green stripes and even little green frogs that sound like motorbike engines winding up. And almost as loud.

Anyhow, when I’m writing a first draft and can’t figure out where I want the narrative to go, I’ll step away from my computer screen and walk outside to check my garden. Sometimes an idea comes to me even before I reach the door, but I go for a walk anyway, just to see what’s new. This month, it’s grevilleas. 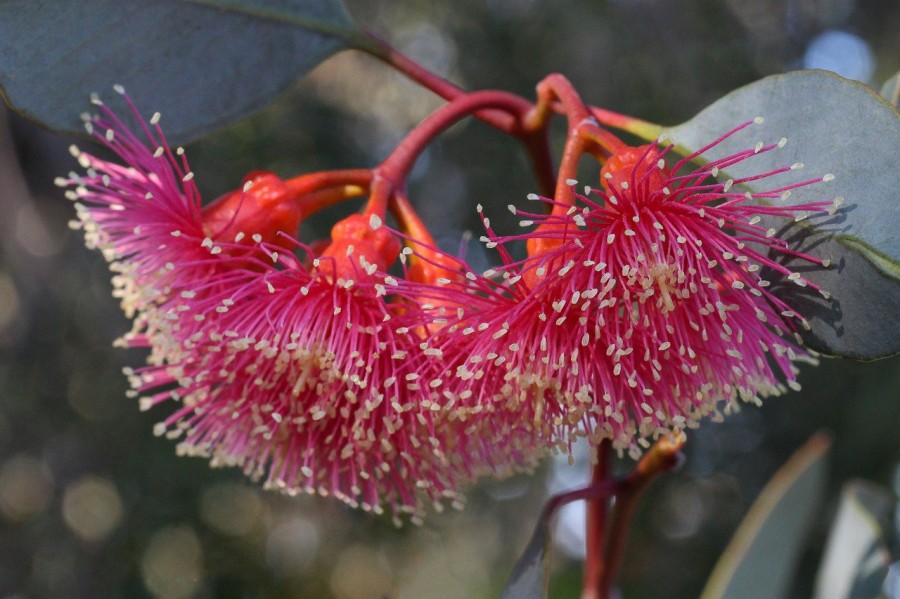 Eucalyptus Torquata, also known as Coolgardie gum or Coral gum is indigenous to a very small part of Western Australia, to the east around the goldfields. It grows from six to twelve metres and loves dry summers, one of the reasons I’ve planted it in my backyard — the one I’m doing my best to turn into a mini Aussie native forest. I also planted a couple of Silver Princess gums and a Red Capped Gum, all of which belong to the botanical order: Myrtales.

I’m so in love with these trees, I named my book publishing imprint after them: Myrtales Press.

Myrtales also hints at story telling, and one of these days I’ll make up a logo to go on my book title page: a tiny sketch of a eucalypt flower.

Meanwhile here are some pictures of my forest. Eighteen months ago, this land was bare, black sand. It’s quite alkaline and one of the first things we did was bring in a truckload of organic compost to encourage beneficial bacteria, lower the Ph and feed the soil, then later, several trailer-loads of pine mulch to preserve moisture. Most of these plants were babies when we planted them. Look at them now: well on the way to becoming established.

Above, is Woolly Bush (foreground), behind that an Olive Leaf Grevillea. To the right of that by the window is an Eremophila (silver leaves and purple flowers) and beyond that by the back fence is an almost half-grown Lillipilli screening hedge and a Brachychiton which is a Queensland Bottle Tree x Illawarra Flame tree.

Hiding behind the Olive Leaf Grevillea is the birdbath; and just as I took this photo, a Willy Wagtail dove in for a bit of a splash. You can just see her on the left. The greenery at the foot of the birdbath is a prostrate Acacia. To the right is a white Kangaroo Paw. And the others are varieties of Bottlebrushes and Banksias and a Raspberry Jam Wattle.

The little tree in the foreground is my Coral Gum, growing like the clappers. Can’t wait to see it flower, hopefully in a year or two.

It appears I haven’t blogged for 18 months, which is not all that good, but not all that bad either. When I’m not blogging, I’m writing. Now I’ve finally finished my novel — the one that took 13 years to write — it’s time to think about self-publishing it. Yep, I’m going down that road, because I want to and I can. Hopefully it won’t take 13 years.

Meanwhile, I’ve written three new short stories. One will appear soon in the very long-standing Australian magazine, Aurealis, (more details when available). The other two stories are in need of a couple more drafts. Next job is to renovate this website, a little bit each day, to be released all polished up in a month or two.

Meanwhile winter in WA is well and truly here and the Australian native forest I’ve been planting in my back yard is doing very well. Here is a lovely little grevillea flowering right now. Ignore the tiny black spots on the petals. That could be dirt, or it could be bugs. That’s another job: to go check. 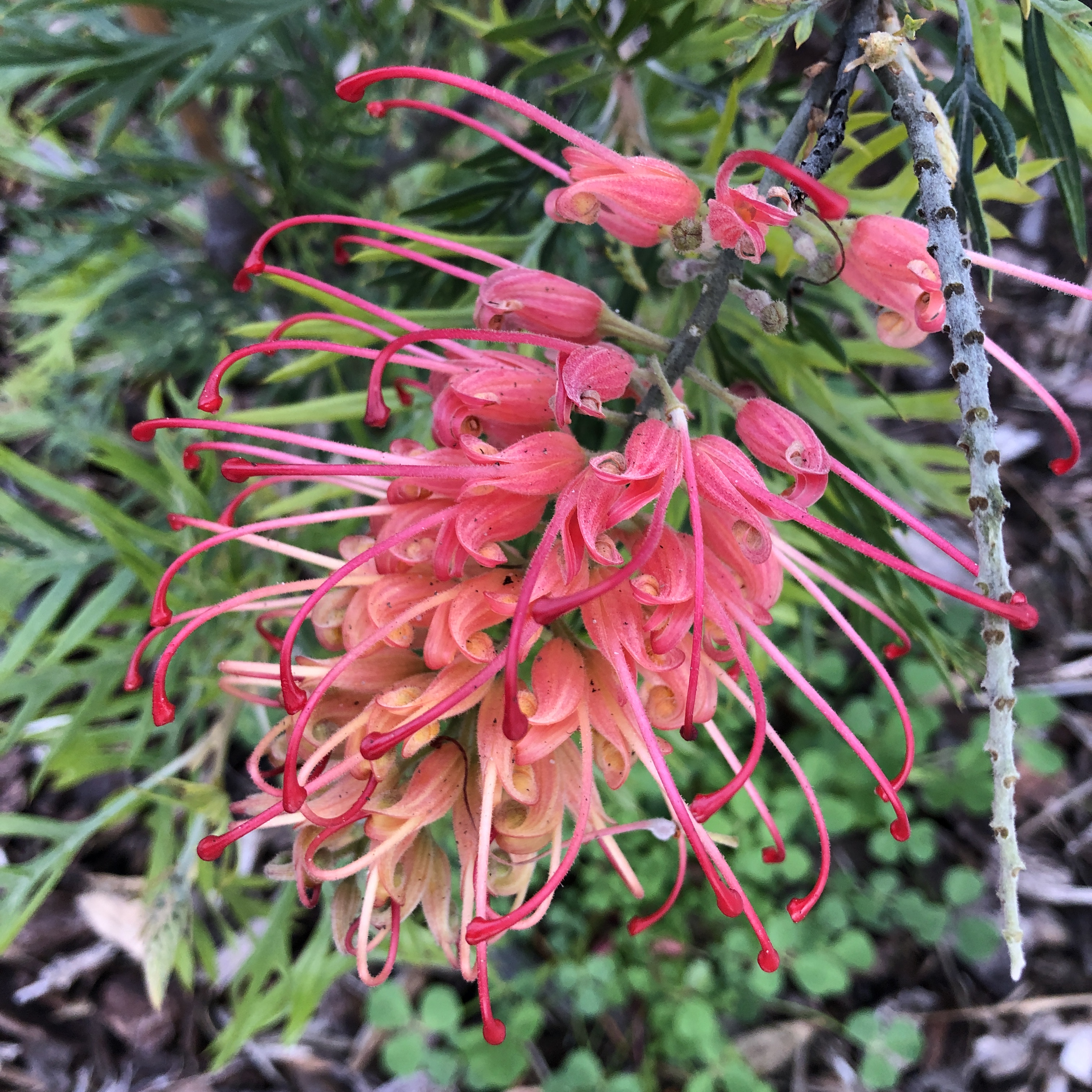